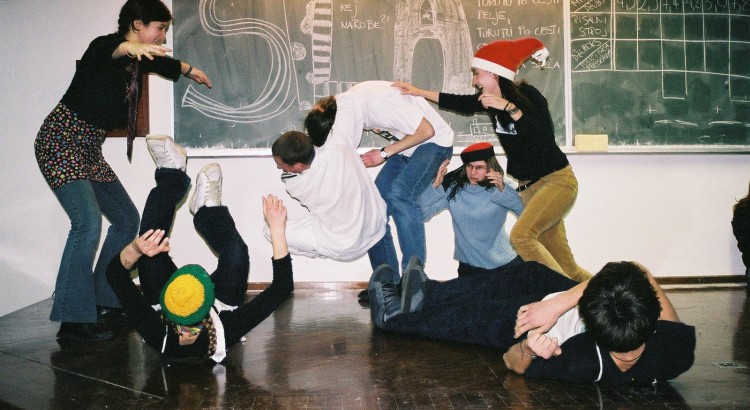 ŠILA is based on modern theatre improvisation, a form of theatre that does not use any script, costumes, props, scenography, and is made up on the spot in front of the very eyes of the audience. The league itself is formed as a yearly impro tournament in which about 20 groups of young improvisers are participating in teams formed in high schools, other public organisations and NGOs from different Slovenian towns, dedicated to educating high school students. There are around 45 matches throughout the year with the finals being held in June at the end of the school year where it is decided who gets to take the trophy home and get the prestigious title of the best youth impro team of the season.
Matches are scheduled every Friday at 17.00 and at 18.30 at Dijaški dom Tabor (Kotnikova 4, Ljubljana, Slovenia). For high school students who just started improvising, there is a project called ŠILA Valilnica, which is a series of non judged matches. However, it is much more than just a competition, weekly workshops are being held with every group with experienced mentors where the students learn to express themselves creatively, to accept responsibility, to work in a group and to face the fear of performing in public. The mentor together with the participants develops a safe environment in which it is ok to make mistakes and embrace failure.
It all began in 1997 when after having seen some (adult) Impro liga performances, some high school students wanted to improvise as well. Mojca Dimec, a member of Ana Monro Theatre, proposed to establish ŠILA as a different version of Impro liga for younger improvisers. Alenka Ogrin, then still the head of Impro liga, took the leadership and the project underway and ever since, many ŠILA participants (called šilarji and šilarke), organisers, mentors and coordinators have come by and helped to write our story.
In 2016, ŠILA was given a national recognition for its work in the youth sector.
﻿